A research team led by Jun Yao, an assistant professor in the Electrical and Computer Engineering (ECE) Department and an adjunct of the Biomedical Engineering Department, has invented integrated nano-electronic sensors capable of simultaneously probing electrical and mechanical cellular responses in cardiac tissue, the most important physiological parameters for assessing tissue state. The research result is being published online in the influential research journal Science Advances. Yubing Sun and Xian Du, both assistant professors in the Mechanical and Industrial Engineering Department, contributed to the collaborative research.

Cardiac diseases are among the main causes of human morbidity and mortality. The first author for the Science Advances paper, ECE Ph.D. student Hongyan Gao, says that the research team’s invention is able “to provide a new tool for improved cardiac studies and has the potential for leading-edge applications in cardiac-disease experiments.”

This application is significant because the electrical and mechanical responses from cells are important state indicators in human-derived cardiac tissues, which are promising models for cardiac disease studies, drug tests, and regenerative medicine. The two activities are intricately correlated through the excitation-contraction coupling, making the simultaneous measurement of them highly desirable and critical for identifying physiological and pathological mechanisms.

However, despite the importance of such dual tracking, it remains challenging to measure the two processes simultaneously. Previous sensors were only able to detect one single property of either the electrical or mechanical response. Now the team is introducing a solution to this thorny issue by converging two sensing functions into one sensor.

Schematic of the sensor structure and cell-sensor interface.

The invented sensor is constructed from a suspended semiconducting silicon nanowire. The 3D protruding and freely suspending nanowire, with its size much smaller than a single cell, can tightly patch onto the cell membrane and “listen to” cellular activities very closely. The silicon nanowire has the unique properties to convert “heard” bioelectrical and biomechanical activities into electrical sensing signals for detection.

The simultaneous recordings enable the detailed tracking of cellular dynamics involving multiple biological processes at high spatiotemporal resolution, which can be used to differentiate cell states (e.g., from drug effects) that were not possible with previous single-function sensors. The convergence of both functionalities in one device also helps to save space to minimize invasiveness to tissue models.

“Other than developing integrated biochips, our next step is to integrate the nanosensors on free-standing scaffolds to innervate in vitro tissue for deep-tissue studies,” says Yao. “In the long run, we hope the nanosensors can be safely delivered to living cardiac systems for improved health monitoring and early disease diagnosis.”

The research results accomplish the main proposed idea in a National Science Foundation CAREER award received by Yao in 2019. (August 2022) 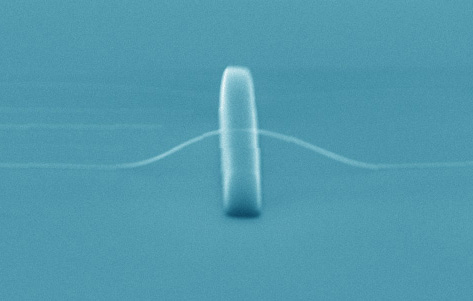